Food Conditioned Vs Habituated Bears: Which One Is As Dangerous As We Think?

If you live anywhere bears or have a lot to do with them, you would have come across the terms “habituated” and “food conditioned” a number of times.

The fact is not all the above statements are true. So, which one is true and which ones aren’t? Read on to find out.

What is a “food conditioned” bear?

An animal is described as food conditioned when it has been trained or has learned on its own that it will get food it if it performs certain actions.

It actually began as a training technique for pets and other animals. The animal gets a food reward if it performs a specific action.

This may sound all good and okay but it’s actually very dangerous for big creatures, like bears, and the humans that encounter such bears. Bears typically become food conditioned when people leave their garbage (leftover food) out carelessly in bear territory.

Remember that bears have an extremely keen sense of smell. In fact, they can even smell food that is canned! Now, when these animals raid a garbage can or dumpsite, eat the leftovers and develop a “taste” for human food it’s almost always a recipe for disaster.

When this happens, the bear can hardly go back to its natural diet and will do almost anything to get more “tasty” human cooked food. Consequently, such a bear is called “food conditioned.” Because the animal has now learnt to associate humans, their cars, campsites, etc with food it will keep coming back for more. The case of the Yosemite Black Bears comes to mind here.

Just tasting cooked food once is enough to start a bear on the food conditioned path. In some cases, the bears resort to force or even attacking people to get at their food.

What is a “habituated” bear?

In areas where human dwellings overlap bear habitat, the bears get to see and observe people quite frequently. Sometimes even daily.

As a result, seeing humans does not startle them. Rather, they largely ignore the people around them and just continue what whatever they are doing. Such bears are referred to as “habituated.”

Usually, they’ve had a peaceful relationship with the humans around them so they have no reason to fear or attack them.

What Are the Implications Of A Food Conditioned Bear Vs A Habituated Bear?

Although these are two very different conditions, people and even experts still use the terms wrongly to date. This has tendency to create confusion and misunderstanding about the implications of both.

A Food Conditioned Bear Will:

A Habituated Bear Will:

Block QUOTE: However, note that a habituated bear in some rare cases can also be food conditioned making it also dangerous to human beings.

It All Boils Down To How We Treat Them

Reading so far, you can easily see that being food conditioned is a terrible state for a bear indeed. Unfortunately, habituated bears too easily become food conditioned!

There’s a very thin line between the two and human carelessness causes the problem most times. Even when a bear is habituated and generally “minding its business,” people will approach it and even try to touch or pet it. Especially younger bears. Humans will often tempt very young bears to come closer by dangling food in front of them.

This is extremely dangerous.

The bear will grow up with a hunger for human food and it frequently turns disaterous for both bears and humans. Very often these bears will attack people and have to be hunted down and shot.

On the other hand, habituated bears can and do get along with people but humans have to learn to be responsible around the bears too. Habituation, if used responsibly, is an ideal tool for studying bears in their natural habitat.

Churchill is like no other place on Earth. It’s called the Polar Bear Capital Of The World for a reason.

Under normal circumstances Churchill, Manitoba should be a quiet little town with nothing sensational going on. For most of the year, life goes on pretty quietly and there are very few strangers in town. In fact, you can’t even get there by road!

However, come September then begins an annual event that lasts for some months and has placed this town solidly on the map: it’s the gathering of the Polar Bears.

The bears begin to swim ashore from mid-July, and their numbers increase dramatically by END_OF_DOCUMENT_TOKEN_TO_BE_REPLACED

Yosemite Bears are becoming smarter due to the past mistakes of humans in the park.

Since Yosemite National Park first opened in 1890, people have been fascinated with the Black Bears that roam the land scavenging for food.

At first, the bears could easily find food in the trash cans and dumpsters the park used. In 1923, the park officials realized people were highly interested in observing these bears and they began intentionally leaving trash in certain areas of the park.

Once these “feeding areas” opened, people felt more comfortable with trying to feed the bears themselves. No one realized the problem this would cause.

END_OF_DOCUMENT_TOKEN_TO_BE_REPLACED

Meet the Cantabrian Brown Bear, one of the most heavily protected bears on the Planet.

The Cantabrian Brown Bear is a population of Eurasian brown bears dwelling in the Cantabrian Mountains, Spain.

These are timid, cautious bears that were hunted almost to extinction. As a result, they avoid human contact whenever possible.

END_OF_DOCUMENT_TOKEN_TO_BE_REPLACED

The Canadian Province of BC has finally decided to end bear trophy hunting.

Conservationists and an overwhelming majority of British Columbia (BC) residents are happy at the recent announcement banning the Annual Bear Trophy Hunt in the province. Effective November 30 2017, trophy hunters will no longer be permitted to hunt grizzlies (a subspecies of brown bear) there.

Trophy hunting was reintroduced in the province 16 years ago by the previous Liberal government. The Liberals were later ousted in July by the New Democratic Party.

One of the newly elected party’s promises was to end the hunt.

What Is Trophy Hunting?

END_OF_DOCUMENT_TOKEN_TO_BE_REPLACED

Exhibit you love for bears with one, or more, of these unique Bear Tattoo Designs.

No matter how much you love bears, you’ll still agree that these are animals that are better 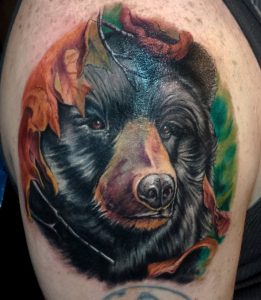 admired from afar. For one thing, you can’t actually stroll up to a grizzly or black bear in the wild and give it a bear hug. Right?

Well, you can get around that by just carrying an image of your favorite bear along with you: all day.

Check out our compilation of up to 25 creative and unique Bear Tattoo Designs. Some are so real that they are sure to draw lots of attention.

END_OF_DOCUMENT_TOKEN_TO_BE_REPLACED

The Asian Black Bear is one of the most sought-after bear by poachers today.

The Asian Black Bear is a medium to large-sized   mammal native to deciduous tropical forests in Asia.

This bear, also called the Asiatic black bear, has a strong and sturdy build with a large head and thick-set legs. Their legs allow them to stand for long periods of time so as to appear larger when they feel threatened.

You can easily identify them with their distinctive black fur (though sometimes brown or blonde).

There’s a distinctive whitish v-shaped marking on their chests and a band of longer fur around their necks. This longer fur almost looks like a mane and may be there to also make them look larger to potential predators.

Though this bear species has an extremely keen sense of smell, they suffer from poor eyesight and hearing.

These bears have adapted mostly to arboreal living (living in trees), and are closely related to the American Black Bear. However, unlike other black bears that are increasing in number, this particular bear is decreasing sharply in number.

END_OF_DOCUMENT_TOKEN_TO_BE_REPLACED

China’s Bear Bile Farming Industry may be winding down but the practice has spread to other neighboring countries.

When most of us think of bears, we imagine them as free wild creatures that roam undisturbed throughout the mountains.

However, this is far from the truth. The reality is that in parts of Asia, there are over 12,000 imprisoned Asiatic black bears and Sun bears on bear farms.

These bears are captives because of an increase in demand for bear bile. Over the past three decades, this trend led to the adoption of extracting bile from living bears.

These poor creatures are caged and milked daily. Bear bile farming was initially viewed as a positive method for controlling and satisfying the public’s demand for bile.

END_OF_DOCUMENT_TOKEN_TO_BE_REPLACED

Any cookies that may not be particularly necessary for the website to function and is used specifically to collect user personal data via analytics, ads, other embedded contents are termed as non-necessary cookies. It is mandatory to procure user consent prior to running these cookies on your website.