It’s rare to see a child that didn’t grow up with at least one beloved Teddy Bear, especially in the Western World.

Although teddy bears are a delight internationally, their story actually begins in the USA in very unlikely circumstances.

On November 14, 1902, then American President, Theodore Roosevelt, was invited by Mississippi Governor Andrew H. Longino on a hunting trip down south. Their itinerary included a 10-day hunting expedition in the city of Onward.

Unfortunately, the president’s group, led by a former slave and Confederate cavalryman Holt Collier spent hours in the woods with no luck. Holt and Roosevelt’s assistants in a bid to make the president’s visit worth it, cornered a young  American Black Bear, clubbed it thoroughly, tied it to a willow tree and asked the president to shoot it.

Remember that Roosevelt was an avid hunter. In fact, historic records show that he was the first Westerner to travel all the way to China to kill a giant panda.

However, shooting a bound animal was unsportsmanlike, and Roosevelt realized it. When summoned, he declined taking the shot.

This incident quickly led to a media frenzy.

From Public Surprise To The Birth Of The Teddy Bear

The story spread like wildfire in the media as newspapers retold the story of a president who showed sympathy to a bear. Which president you may ask, President Theodore Roosevelt, a famous game hunter! 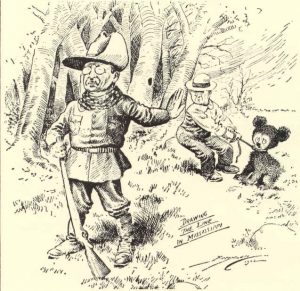 No doubt, the story captured the attention of many. Clifford Berryman, a political cartoonist, created a cartoon illustration of the president’s encounters with the bear. It pictured a young black bear with the president showing his back to it.

This illustration by Berryman made it to the Washington Post and was published on November 16, 1902.

Morris Michtom, a Brooklyn resident, picked the newspaper on November 17 and he saw the cartoon illustration. He and his wife Rose ran a candy shop that also sold stuffed animals.

In a flash of inspiration, an idea struck them to create a stuffed bear which they named “Teddy’s Bear.”

The bear on display was such a success that on the first day of display, over a dozen people offered to buy it.

The Teddy Bear was first created in 1902 in Brooklyn, New York by a candy shop owner. He named it Teddy to honor President Theodore Roosevelt.

The couple posted a gift, the initial teddy bear to the president in a bid to use his name on the bear. He consented, and that’s how Morris found the first ideal toy company which grew to be a great success.

Coincidentally, at about the same time the Steiff firm, in Germany, had also begun producing stuffed bear cub toys with movable joints.

Have Teddy Bears Had Any Effect On Our Perception Of Bears Generally?

A teddy bear helped establish the bear as a symbol of courage, endurance, and strength!

The cuddly and appealing nature of the teddy bear made it an instant hit. It was so successful that with time it was no longer just a kid’s toy anymore. Adults too, found it an ideal gift and even a companion. It also became a choice gift for romantic exchanges, birthdays, baby showers and so on.

But most of all, it gradually helped changed public opinion about bears to dome extent. From mockery in some quarters, the public sentiment about bears gradually began to shift. Because if a famous game hunter and a president could sympathize with a bear, why not you?

Today, teddy bears are ubiquitous; you’ll find them everywhere. Even royals are not left out. For instance, the Grand Duke George Mikhailovich of Russia bought a red Steiff bear for his daughter, Princess Xenia Georgievna, in 1908.

It’s therefore no surprise to find that people keep highly cherished bears in their homes, especially when they are young.

Interestingly, the British are particularly fond of their teddies. A Travelodge survey showed that up to 35 percent of British adults go to bed with their teddy bears. Though these were mostly women.

Again, the same survey showed up to 25 percent of British businessmen take their teddy bears along on business trips.

Obviously, the closeness we share with our teddy bears has become a strong bond. Why is this so?

Often called transitional objects, teddy bears are popular with men, kids, and ladies alike as they provide a sense of security and company especially when one is feeling lonely. This is especially the case with young children.

In a school setting, when you leave your kid and promise them to be back later to pick them, a teddy bear offers a sense of security and comfort.

Cuddling a teddy bear brings comfort and solace in an otherwise lonely environment.